You are here: Home / Archives for Allen’s Hummingbird When a hummingbird takes off, it often appears to fly straight forward or straight up. We do not see a hummingbird make a big, obvious hop, followed by steady wing beats to gain altitude.

A hummingbird has relatively small leg muscles compared to other birds. A hummingbird does use its legs, but the powerful flight muscles in the chest do the most of the work. Those muscles, plus the hummingbird’s shoulder joints, make some dramatic take-offs possible.

A hummingbird can take off with power – sometimes flying straight forward, sometimes almost straight up. (This doesn’t mean a hummingbird won’t use gravity to start by dropping from a perch … it just doesn’t have to in the way some other birds do.)

And maybe this Anna’s Hummingbird had a strategy – look at the position of the twig in the second shot. It is slightly higher than when the hummingbird was on it.

We have noticed that a hummingbird will sometimes perch on a small twig that springs back as the bird takes off. Maybe a little extra boost on launch?

Back to hummingbird pictures blog or home.

This Allen’s Hummingbird was guarding a patch of Salvia flowers.

Allen’s Hummingbirds were busy in two large flower beds of Salvia and Bird of Paradise. There were at least two adult males in the area and an adult female. But we had no idea what their actual numbers were – there was too much chasing.

These Allen’s were in the Newport area of Southern California, close to the ocean. We saw them feed from these Salvia and also from the Lily of the Nile, another purple colored flower. This is a good example of local flowers that attract hummingbirds even if the flowers are not red in color.

As usual with the Allen’s Hummingbirds, they vocalized at each other. They were often easier to hear than to see.

This hummingbird GIF shows how light on a hummingbird’s gorget can change how we see the color. This Allen’s Hummingbird was guarding his patch of flowers in Southern California.

Here’s something a hummingbird does slowly – stretching.

Coming in for a Landing GIF

Below is a series of pictures showing a hummingbird approaching, then landing on a feeder. Just for fun, we put these pictures into an animated hummingbird GIF.

The photos are of an Anna’s Hummingbird, taken at the Boyce Thompson Arboretum during the spring of 2014. Several other hummingbirds were using the feeder on that day, including males. This bird was a little nervous on its approach, touching down, then backing away, then down. 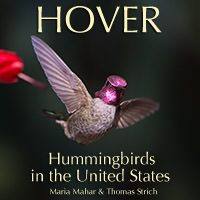 "A tiny bird, flying in place — a flash of color. A hummingbird hovers among the flowers. Then, in an instant, it is gone." Beautiful and dramatic, the world of … END_OF_DOCUMENT_TOKEN_TO_BE_REPLACED 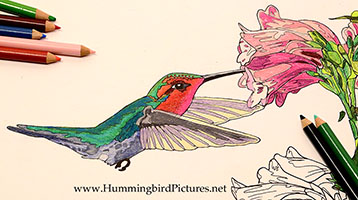 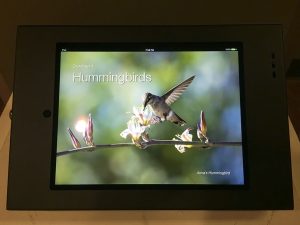 Hover: Hummingbirds in the United States is on display at the Tempe Public Library. The interactive ebook … END_OF_DOCUMENT_TOKEN_TO_BE_REPLACED 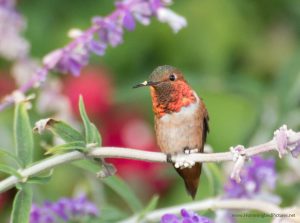